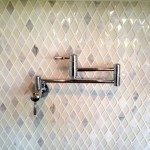 Recently at Mike Blake Custom Homes we installed a pot filler faucet above a 36” gas cooktop. Initially I thought why in the world would anyone really need a pot filler. I mean how many pots of water are you going to carry to the cooktop anyway?

Well now that I have one of my own I have found many uses for it. First the most obvious is 1 gallon of water weighs about 8.5 pounds so if you have a big family and you are cooking a big pot of pasta or boiling potatoes it’s much easier to pull the pot from below the cooktop set it on a burner and extend the pot filler faucet and fill’er up.

But here are some unexpected uses. I do steam a lot of vegetables and the pot filler makes it an easier process. Plus, I can easily add more water when needed. I also boil water for tea and that’s so much easier. When I’m cooking a stew or soup it almost always requires a cup or two of water. It’s so much easier to pull the measuring cup from the drawer extend the pot filler faucet and measure out a cup of water.

And occasionally after cooking I have a large dirty skillet. Instead of putting it in the sink to soak I add water to skillet turn on the burner and let the water boil to remove excess food from the skillet before empting it down the disposal.

In addition, I think they are aesthetically pleasing and add interest to the kitchen.